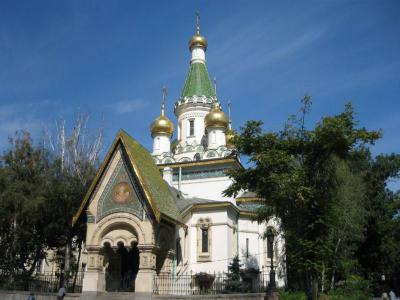 The last days of the Ottoman Empire in Bulgaria saw the destruction of the Saray Mosque in Sofia in 1882. Bulgaria had been liberated from Ottoman control by Russia in the Russo-Turkish War of 1877-1878. It so happened that the empty lot for the mosque was next door to the Russian Embassy. Just the place for an official Russian church.

The church was named for St. Nicholas the Miracle-Maker, the patron saint of Tsar Nicholas II. Russian architect Mikhail Preobrazhenski designed the church in a Russian Revivalist style. Similar to Muscovite churches of the 17th century, the church was built by Alexander Smirnov, who was working on the Alexander Nevsky Cathedral next door.

The multicolored tiles on the exterior were done by G. Kislichev. The interior murals were painted by the same artists who did the murals for Alexander Nevsky Cathedral. There are five golden domes. The carillon was donated by Tsar Nicholas II of unhappy memory. Building began in 1907. Consecration came in 1914, in time for the Russian Revolution.

The church actually remained open during the Communist regime in Bulgaria, 1944-1989. Attendance and services continued under the watchful eyes of the commissars. The Russian church was not interfered with.

The crypt of the church harbors the remains of Saint Archbishop Seraphim Sobolev. He was the operator and moving spirit of Russian Orthodox churches in Bulgaria from 1921 until his death in 1950. He has been canonized a saint and has been credited with several miracles. Visitors customarily leave notes at this grave, asking for his intervention.

The church has two entrances. The south entrance, on Tsar the Liberator (Tsar Osvoboditel) Boulevard, has the face of Saint Nicholas above it. The north entrance faces a nearby park. Above it is the likeness of Alexander Nevsky. Guided tours should be arranged in advance.
Image by vera46 on Flickr under Creative Commons License.