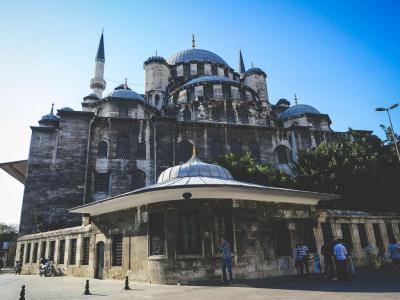 Built during 1561-63 and located in Eminonu, Istanbul, this is an Imperial Ottoman mosque of great significance. It was designed by the famed Imperial Architect Mimar Sinan for the Grand Vizier Damat Rüstem Pasha, husband of Princess Mihrimah, daughter of the Ottoman Sultan Suleiman “the Magnificent”.

The mosque has a large number of Iznik tiles (decorated ceramic tiles) that make it distinct from others. They are set in many floral and geometric patterns that cover not only the interior but are also found on the columns and porch outside. No other mosque in Istanbul makes use of such tiles in such a manner. The tiles used to decorate Rüstem Pasha are of the characteristic tomato-red color, which denotes the early Iznik period.

The mosque was built overlooking a vast complex of shops whose rent used to financially support the mosque complex. The main dome of the mosque rests on four semi-domes and the design of the building is that of an octagon inscribed in a rectangle. Galleries are present to the north and south of the main room, and these are supported by marble columns and pillars.

Why You Should Visit:
Stunning mosque demonstrating some of the greatest Ottoman architecture and tile work of the classic period.
Tricky entrance on a 2nd floor, through a small gate and a short stair, but once you make it to the front you get fascinated.

Tip:
Entry is free, but as expected – shoes off before entering and head scarves for the women.
The mosque is right beside the Spice Market, so it's very easy to visit the two spots in one morning/afternoon.