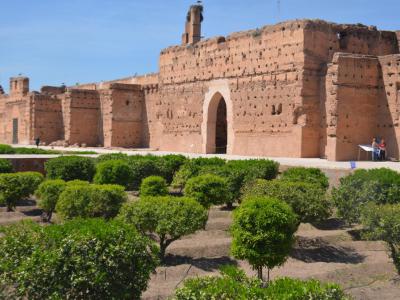 Those who wish to understand the incredible beauty of ancient Marrakech, should visit the Saadian Tombs in the medina's royal district, called the Kasbah.

The Saadian dynasty ruled in Morocco from 1554 until 1659 and almost nothing from their reign has survived till our day, except the tombs which were commissioned by Sultan Ahmed Al-Mansur in 1554 for himself and his family. When the dynasty fell to the Alaouites, the new Sultan wanted everything built by the Saadians destroyed, but drew a line at touching the tombs, which were partially sealed off (although important people were buried here until as late as 1792).

Al-Mansur himself, along with 60 members of the Saadian family, was entombed in the exquisite "Hall of the Twelve Columns" adorned with imported Italian marble, intricate and geometric tile work, gilded honeycomb muqarnas (decorative plasterwork), and elaborate ceilings stunning in detail and vibrant color. The nearby "Hall of the Three Niches" houses important princes while some 170 chancellors and wives are interred in the garden.

The tombs remained hidden until 1917 when they were discovered from aerial photographs, and lovingly restored by a French organization, the Beaux-Arts Service. Due to having been sealed and protected from external conditions, the tombs were remarkably preserved and the Beaux-Arts have done a wonderful job. Those who rest here, indeed rest in peace.

Why You Should Visit:
The stunning architecture of the tombs will keep you in awe of the great design produced back in the day.

Tip:
Ticket lines can be long, so an early morning visit will be generally cooler and more pleasant.
Unfortunately (for English speakers), there is little information in English, so hiring a local guide can enhance your appreciation.
When exiting, go and have a drink at the terrace of the Kasbah Café overlooking the square where men enter the Kasbah Mosque.
Also, on the corner is an argan cooperation with some of the best organic argan oil in Marrakech. Buy some amlou there and you'll never eat Nutella again!