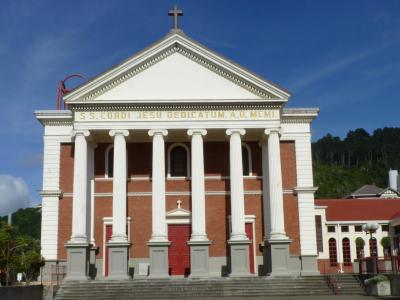 The Metropolitan Cathedral of the Sacred Heart and of Saint Mary His Mother, better known as Sacred Heart Cathedral, is a Roman Catholic cathedral.

The first church to be built on the Hill Street Site was St. Mary's Cathedral, blessed and opened in 1851. It was gutted by fire in 1898, during repainting. Because the Catholic population of Wellington was then mostly based in the Te Aro and Newtown areas, it was decided that a new cathedral should be erected in that part of the city and a 'serviceable church in brick' built on the site of the old cathedral.

However the new church, called the Basilica of the Sacred Heart, was rather grander than this. Its foundation stone was laid in 1899 and the building blessed and opened two years later. The money to build Sacred Heart was taken from the fund for the new cathedral. The new cathedral was never actually built. In 1983 the Basilica was elevated to the status of a cathedral by Cardinal Thomas Williams.

Sacred Heart Cathedral has a strong music tradition. There are two instrumental (piano, guitars, organ) and vocal ensembles to lead congregational hymn-singing for at least one Sunday Mass each week.

The boys' choir was made up of about 15 boys from the neighbouring Sacred Heart Cathedral School. Each boy received a scholarship which paid for weekly individual vocal tuition and theory lessons. The boys sang an occasional Choral Mass during school term.

The Cathedral Grand Organ was situated in the choir loft and the console in the whispering gallery. It was designed and built by Arthur Hobday in 1905 and had been revised and enlarged since with the changing needs of the cathedral.

Inside the Cathedral at the entrance are small statues of the Four Evangelists. These originally stood under the first High Altar of the present cathedral. Near the sanctuary is a statue of St Brigid, patron of St Brigid's Church, Wadestown, which was closed in 2007. Behind the cathedra in the sanctuary is a bronze and enamelled Processional Cross designed and made by Graham Stewart for the visit of Pope John Paul II to Wellington in 1986. The sanctuary contains some important mosaics. Beneath the Stations of the Cross is a set of fourteen bronzes, Mater Dolorosa, designed by Wellington sculptor, Eve Black, depicting Mary's sorrow as she witnessed her son's journey to the Cross and Grave
Image Courtesy of Wikimedia and Michal Klajban.
Sight description based on Wikipedia.