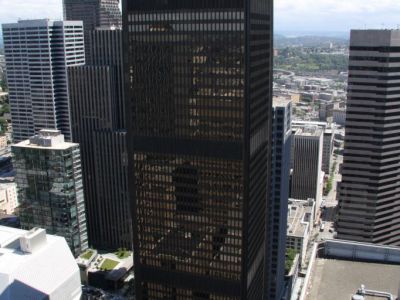 Downtown Seattle's oldest skyscraper, Safeco Plaza is a 50-story, 630 ft (192 m) tower that locals sometimes refer to as "the box the Space Needle came in". When the structure was completed in 1969, it dwarfed Smith Tower, which had reigned as Downtown's tallest building since 1914, and edged out the Space Needle (1962) in Seattle Center by 25 ft (7.6 m) to become the tallest structure in the city for sixteen years, until the completion of the Columbia Center in 1985.

The bronze-colored aluminum and glass structure was the first modern class-A office building in Seattle and is the first skyscraper in the world to feature a Vierendeel "space frame" capable of transferring and resisting bending moments. At the ground level there is a two-story lobby as well as other amenities including 15,000 sq ft (1,400 m2) of ground-floor retail that features a fitness center, a bank, some restaurants, a medical center, and a post office.

Just outside, a definite highlight is Henry Moore's abstract bronze creation, "Vertebrae 1968" – the British artist's amazing three-part sculpture with three interlocking elements inspired by bones or flints. It was cast in edition of four; the others three are at the Israel Museum in Jerusalem and the Landesbausparkasse in Münster, with the artist's copy at the Henry Moore Foundation in Perry Green, Hertfordshire.
Image Courtesy of Wikimedia and Cumulus Clouds.