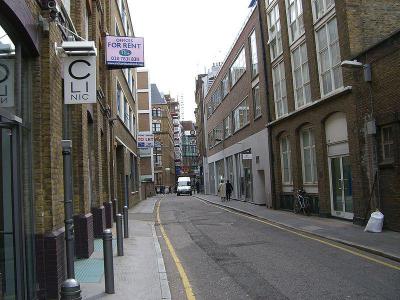 Once at the heart of London’s most infamous rookeries or slums, Saffron Hill is forever associated with Charles Dickens’ 1838 novel "Oliver Twist" and particularly with one of its lead characters, the arch criminal Fagin.

Back in the 19th century, Saffron Hill was known as Italian quarter which took its name from the saffron that used to grow in the area but was gone by the time Dickens wrote the book. As well as Fagin’s lair, the street is also home to the salubrious pub The Three Cripples, a favoured watering-hole of Bill Sikes, the main antagonist in the "Oliver Twist" novel. During Dickens’s time, The Three Cripples was apparently the name of a lodging house in Saffron Hill, located next to a pub called The One Tun.

The area also inspired Dickens to write another, minor masterpiece "A Christmas Carol" after visiting a ragged local school here in September 1843 and being powerfully struck by the horror he witnessed. The children were already thieves and prostitutes, illiterate diseased and unwashed.

A squalid neighbourhood, home of paupers and thieves, Charles Dickens describes it in "Oliver Twist" as "a dirtier and more wretched place he [Oliver] had never seen. The street was very narrow and muddy, and the air was impregnated with filthy odours... Covered ways and yards, which here and there diverged from the main street, disclosed little knots of houses, where drunken men and women were positively wallowing in filth; and from several of the door-ways, great ill-looking fellows were cautiously emerging, bound, to all appearance, on no very well-disposed or harmless errands.”
Image by Edward Betts on Wikimedia under Creative Commons License.