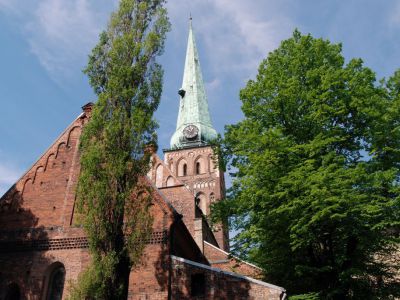 Located in the old part of Riga, on Klostera Street, Saint James' Cathedral (or St. Jacob's Cathedral) is one of the oldest catholic temples in Latvia. The first mention of the church dates back to 1225, although the building itself is believed to have been in place since 1210, when Bishop Albert requested three churches to be built to serve rural parishes. In 1522, it became a Lutheran church, the first one to hold a Lutheran sermon in Latvian, although in 1584 it was given back to the Jesuits. In the following centuries the church had changed hands several times, serving consecutively the Swedish, Russian and even Estonian Lutheran communities. In 1812, it was even used as a storage depot by the French troops. In 1901, Saint James' altar (oldest in Riga), built in 1680, was replaced with a new one. Since 1923, the cathedral has been in Catholic possession.

The church represents a mixture of Gothic and Romanesque architectural styles and is made of red brick and limestone. Art Nouveau motifs are also present in the decoration. The three floor Gothic tower is the only church tower left in Riga that has a spire. The cathedral forms part of the old Riga UNESCO world heritage site.
Image by Harvey Barrison on Flickr under Creative Commons License.