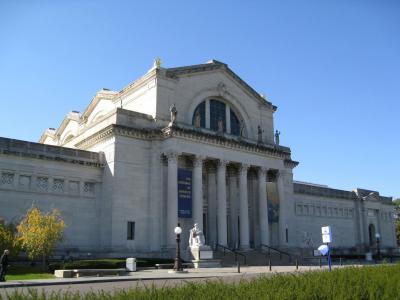 In addition to the featured exhibitions, the Museum offers rotating exhibitions and installations. These include the Currents series, which showcases contemporary artists, as well as regular exhibitions of new media art and works on paper. The Saint Louis Art Museum began in 1881 as the Saint Louis School and Museum of Fine Arts, an independent entity within Washington University in St. Louis. Originally housed in a building in downtown St. Louis, the Museum moved to its current location in Forest Park after the 1904 World's Fair. During the 1950s, the Museum added an extension to include an auditorium for films, concerts and lectures. The collection of the Saint Louis Art Museum contains more than 30,000 artworks dating from antiquity to the present.

Want to visit this sight? Check out these Self-Guided Walking Tours in Saint Louis. Alternatively, you can download the mobile app "GPSmyCity: Walks in 1K+ Cities" from iTunes App Store or Google Play. The app turns your mobile device to a personal tour guide and it works offline, so no data plan is needed when traveling abroad.