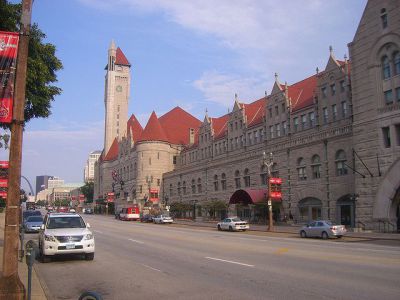 St. Louis Union Station is a former passenger train terminal in St. Louis, Missouri. Once the world's largest and busiest train station; in the 1940s it handled 100,000 passengers a day. At its height, the station combined the St. Louis passenger services of 22 railroads, the most of any single terminal in the world.

As airliners became the preferred mode of long-distance travel and railroad passenger services declined in the 1950s and 1960s, the massive station became obsolete and too expensive to maintain for its original purpose. It was converted in the early 1980s into a hotel, shopping center, and entertainment complex. Today a National Historic Landmark, it serves only local rail transit passengers.

Why You Should Visit:
The Grand Hall is magnificent with statues, stained glass and the "whispering arches" at the front door.

Tip:
A light show happens every hour from 5-11pm. It is on the ceiling of the historic Grand Hall. There are comfortable seats and a full-service bar.