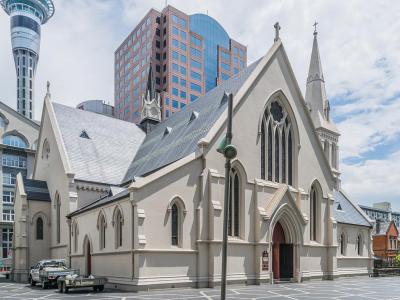 From modest beginnings in 1841 to the grand building you see before you today, St. Patrick’s Cathedral in Auckland has always been the centre of Catholicism in the city. The land that the cathedral is built on was granted by the crown to the city’s first bishop Jean Baptiste Pompallier on June 1st, 1841. A simple wooden structure was first built to serve the 300 odd strong congregation that was mainly made up of Irish immigrants. It was clear that a more substantial building would be required and in 1845 an architect was commissioned to design a stone church. When Auckland was made a diocese in 1848, it was clear that a grander building would be required.

In 1884 the foundation stone was laid for extensive expansions to be made to the church and the old stone church became the transept. A new nave was added that included a bell tower and bells were imported directly from Rome. The new cathedral was officially opened on March 15, 1885 – just before St. Patrick’s Day. Further expansions were carried out to make more space for the growing city’s congregation at the turn of the 20th century and the church that was completed in 1907 is the very same that you gaze upon today.
Image by Ustas on Wikimedia under Creative Commons License.