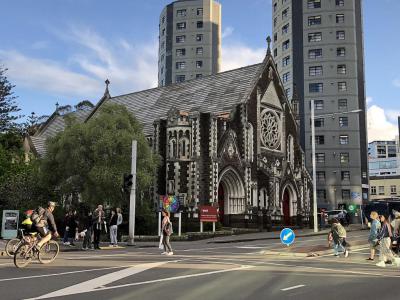 Saint Paul’s Church in Auckland is one of the city’s Historic Place Trust buildings, which demonstrates the importance of the church in the development of the city. The church is a stunning example of the blending of the best elements of 19th century Gothic Revival designs with the natural resources of the New Zealand colony – intelligent use of native timber has been used throughout the cathedral. The building that you see today is the third built for the congregation of Saint Paul’s – the grand design was done by William Skinner and the foundation stone was laid in 1894. Due to the economic dire straits of the late 19th century, the grand plans for a bell tower and spire were deserted and have never been revisited at a later date.

Inside the church there are some unique features that make it an interesting place to visit. There is a chalice that was presented to the church by Queen Victoria and carved stones that come from Westminster Abbey, Canterbury Cathedral, St. Paul’s Cathedral in England and Yorkminster. Sections of the church, especially around the bishop’s throne are highly decorated. Saint Paul’s Church is often referred to as the “Mother Church” since it was the first to be built in the city.
Image by Jean Fouquet on Wikimedia under Creative Commons License.