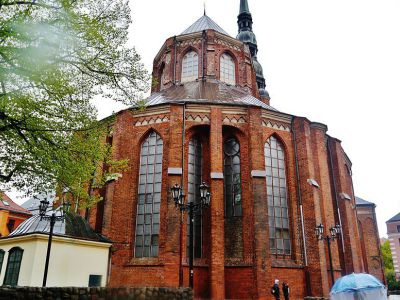 Saint Peter’s Church in Riga appeared in documents for the first time in 1209, as a masonry church that had survived, virtually unscathed, the fire that devastated much of the city that year. Since then, the history of St. Peter’s has been marked by a number of misfortunes, including fires, strikes of lightning and wars, all of which had their toll on the building. The most destructive of them were the lightning of 10 May 1721 and World War II.

Today, the church reflects a mixture of styles, revealing Romanesque, Gothic and Baroque influences. Its current appearance emerged in the 20th century after the last restoration. Those works were preceded by a serious research conducted in 1954 by Pēteris Saulītis. The actual restoration started only in 1967 and lasted until 1983 under the supervision of Saulītis and Gunārs Zirnis.

Saint Peter’s got back in service in 1991 and in 2006 was reinstated under the Evangelical Lutheran Church of Latvia. From time to time, it hosts concerts, exhibitions and other cultural events. The main attraction of the church is the tower with an esplanade, much popular with tourists, offering a bird's eye view of Riga from a 72 metre (236 ft) altitude. To get this high, visitors have to take an elevator. On December 4th 1997, St. Peter’s Church was added to the UNESCO list of world heritage sites.
Image by Zairon on Wikimedia under Creative Commons License.