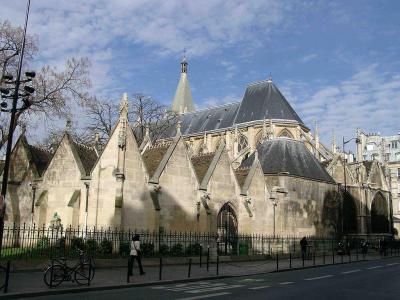 The Latin Quarter is full of historical monuments, and Saint-Séverin is one of the highlights. Its exterior architecture is quite imposing, solid, and unlike any other. Built in the late Middle Ages in the Flamboyant Gothic style, it is one of the oldest temples in Paris.

At the end of the 5th century, King of the Franks, Clovis, established a settlement on the island of Parissi. Eventually, it became known as Paris and was made the kingdom's capital. Clovis's wife together with Saint Genevieve were ardent Christians and persuaded the king to make Christianity the official religion of his domain. At that time, a hermit priest, called Séverin, also lived on the left bank. After his death, an oratory was built over his tomb. By the 11th century, a small church had been erected to replace the original tomb of the saint, which soon turned into a foremost religious site.

The key features of this church are the colorful ancient stained glass and a set of seven modern windows inspired by the seven sacraments of the Catholic Church. Also deserving mention is the church's bell, the oldest in Paris; the odd column, designed in the shape of a trunk of a palm tree; its great organs and many beautiful paintings.

Despite being a historic and religious monument, the Saint-Séverin Church remains an active place of worship. It is free to enter and rarely crowded, but please be respectful if a mass is going on.