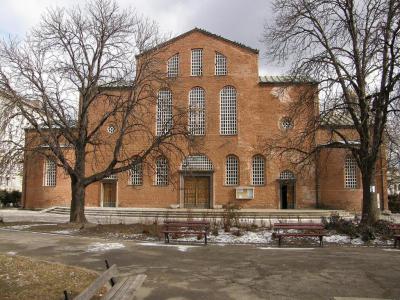 Saint Sofia Church was built during the reign of Byzantine emperor Justinian I in the 6th century. It was contemporaneous with the Hagia Sophia of Constantinople. Like the Hagia Sofia, the Cathedral became a mosque during Ottoman rule. Unlike the Hagia Sofia, it later returned to being a church.

Saint Sofia is the second oldest church in the capital. In the 14th century it donated its name "Sofia" to the city, which heretofore went by the name "Sredets." The present basilica, with its cross design and three towers, one with a cupola-dome, is the fifth church to be built over the bones of a 2nd century Roman theatre and four churches.

When the basilica became a mosque in the 16th century, the interior 12th century frescoes were demolished and minarets were added. In the 19th century the mosque was hit by two earthquakes. One minaret was destroyed and the mosque was left abandoned. Restoration had to wait until 1900, after the Ottomans had left.

The basilica has three altars. The floors are busy with early Christian mosaics having complex ornate animal and floral designs. Besides the ruins of earlier structures, the church also sits in the midst of a necropolis. Tombs and ancient remains have been unearthed under and around the church.

Saint Sofia's benevolent powers are credited with protecting the church by fending off invasions, plagues and other disasters. This has undoubtedly helped preserve the basilica's elegant austere lines from an earlier age. Church icons depict Sofia as a woman representing Wisdom. She stands above the female figures of Faith, Hope and Love.
Image by Klearchos Kapoutsis on Wikimedia under Creative Commons License.