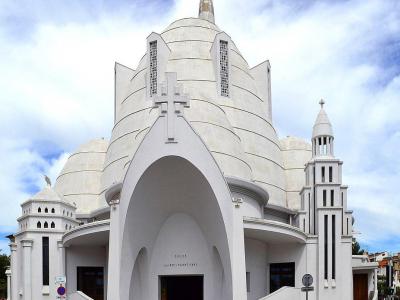 This is one of the local Roman Catholic parishes located in the city. The building pays tribute to their favorite saint, Joan of Arc. It is also one of the most unusual style churches that you will find anywhere in France, because the overall design is a radical departure from the more classical churches to be found elsewhere in town. In fact, the church is still quite controversial among the locals, often being described as a “bee hive shape.” There is beautiful white stone that has been used in the construction of the building also, which has led to the other nickname for this place: the Meringue.

In terms of pure style, this is a great example of art deco. The construction of this place started in 1914, and was led by the famous Frenchman Jacques Droz. Two crypts were built over time. In 1932, a basement was added over these structures, and the three large domes were added later. The height of the largest dome reaches 84 feet into the air. It accentuates the large steeple, which towers above the city of Nice at over 200 feet. On the inside, you will find some beautiful artwork by Eugene Klementieff, who painted the Stations of the Cross into a fresco.
Image by Patrice Semeria on Wikimedia under Creative Commons License.
Sight description based on wikipedia

Nice, an iconic destination in Southern France, has been the lure for the rich and famous for centuries thanks to its temperate Mediterranean climate and picturesque seafront. Other than chic boutiques, hotels and restaurants, the city is famed for its historic attractions, such as the Promenade des Anglais ("Promenade of the English"), 19th century Opéra de Nice, Château, Cours...  view more

Nice is a beautiful city with large streets, a beautiful atmosphere, beautiful places, important historical sites, monuments and buildings. It is a great place to shop. In nearly every region of the city are streets with large zones dedicated to markets and shops with everything from clothes and books, to food and souvenirs. Take the following tour to discover the most beautiful places for...  view more

Thanks to its history, the culture and architecture of Nice is diverse and very beautiful. The influences of Gothic, Italian, Latin and Genoese styles define the architecture of Nice. The beauty of this blend of styles is seen in the old buildings, churches and palaces. Take this tour to discover the masterpieces of art made by people centuries ago which are preserved to this day.