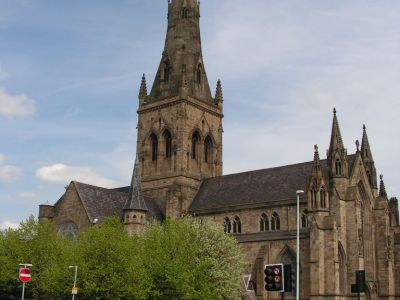 Salford Cathedral is situated on Chapel Street in the City of Salford, which sits opposite Manchester city centre on the west bank of the River Irwell. The City of Salford covers a large swathe of western Greater Manchester, with its centre adjacent to Manchester’s. Chapel Street, a long west to east boulevard connecting the cathedral with Salford Central rail station, was the first street in the world to be illuminated entirely by gas light.

The cathedral itself was built in the 1840s, and consecrated in 1890. The decorative rooftop and distinctive tall spire was inspired by a cathedral in Liege, Belgium, as well as other neo-Gothic churches in the region. The building has been restored multiple times in the intervening years, most notably in 1881, when a storm caused major structural damage to the spire.

Salford Cathedral is a Grade II listed building. Recent restoration has added two modern features to this historic place of worship. An abstract stained glass building was installed in 1990, and a new digital church organ was added in 2004. Salford Cathedral is an active Roman Catholic church, which holds Sunday mass at 12.10pm and 5.30pm, as well as mass at 12.10pm each week day.
Image by Ian Roberts on Wikimedia under Creative Commons License.