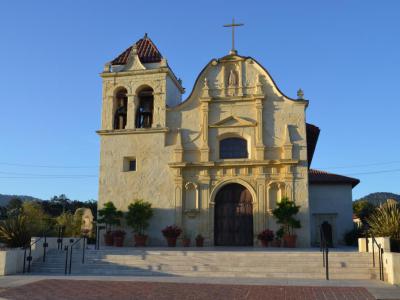 The Cathedral of San Carlos Borromeo, also known as the Royal Presidio Chapel, is a Roman Catholic cathedral located in Monterey. The cathedral is the oldest continuously operating parish and the oldest stone building in California. It was built in 1791-1794 making it the oldest (and smallest) serving cathedral in the United States, along with St. Louis Cathedral in New Orleans, Louisiana. It is the only existing presidio chapel in California and the only existing building in the original Monterey Presidio.

The church was founded by the Franciscan Father Junípero Serra as the chapel of Mission San Carlos Borromeo de Carmelo on June 3, 1770. In May, 1771, the viceroy approved Serra's petition to relocate the mission away from the Presidio to its current location near the mouth of the Carmel River and the present-day town of Carmel-by-the-Sea. The new mission was named Mission San Carlos Borromeo de Carmelo.

When the mission was moved, the existing wood and adobe building became the San Jose Chapel for the Presidio of Monterey. Monterey became the capital of the Province of Californias in 1777 and the chapel was renamed the Royal Presidio Chapel. The original church was destroyed by fire in 1789 and was replaced by the present sandstone structure. It was completed in 1794 by Indian labor in the form of a Latin Cross. The Royal Presidio Chapel is the first stone building in California and reflects the exquisite Spanish Colonial style of the late 18th century.
Image Courtesy of Wikimedia and Rubina Shrestha.
Sight description based on Wikipedia.