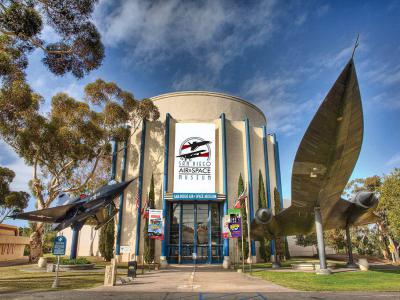 The San Diego Air & Space Museum is dedicated to the world of aviation and space exploration. It is located in the famous Balboa Park. The museum finds its home in the historic Ford Building, which is on the National Register of Historic Places.

The history of aviation and space are displayed in some really great hands-on style exhibits. The story begins with a display that is dedicated to the Montgolfier brothers. In 1783, they built the first hot air balloon in recorded history, and thus became the first people to be able to fly.

You will also be able to see some well preserved historic aircraft and spacecraft here. There is a great replica of Lindbergh’s Spirit of St. Louis also, as well as the only GPS satellite on display anywhere in the world. You can see some great mint condition aircraft here too, like the Spitfire Mk XVI, a Navy F6F Hellcat, and an A-4 Skyhawk jet, just to name a few.

One of the best hands on displays is the MaxFlight exhibit, which lets you imagine you are flying the Space Shuttle. They also recently added an Interactive Space and Air Technology Kid Zone.

Why You Should Visit:
See planes and capsules that you saw on TV and the newspaper.
You can also try out your skills in a flight trainer. Some exhibits have films and slides for further explanation.

Tip:
The 'Flight Path' cafe is a great place to stop for a meal or snack. It has an outdoor patio with beautiful views of the city.