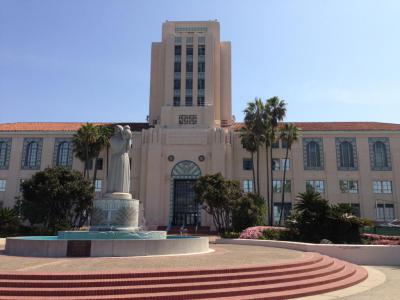 Nicknamed the "Jewel on the Bay" due to its notable Art Deco/Beaux-Arts architecture (with hints of Mission/Spanish Revival) as well as its location fronting San Diego's Bay, this multi-story, tower-topped structure used innovative construction techniques to guard against earthquakes. Considered to be "a prototype of American civic center architecture", the Depression-era building (circa 1938) was listed on the National Register of Historic Places in 1988.

Out in front, there is a beautiful fountain sculpture called "Guardian of Water", depicting a woman holding a jug of water, that symbolizes San Diego's role in being a responsible custodian of its resources. Installed in 1939, it was carved from a single, 22-ton, slab of granite. Quite spectacular.

In 2014, the 12-acre (4.9 ha) Waterfront Park opened on both sides of the building, making for an urban delight. More than a decade in the making, it contains open grassy areas, gardens planted with drought-tolerant flowers on the north side, and picnic areas, a playground with colorful swings and slides, plus interactive water fountains for little children to frolic in – on the south side.