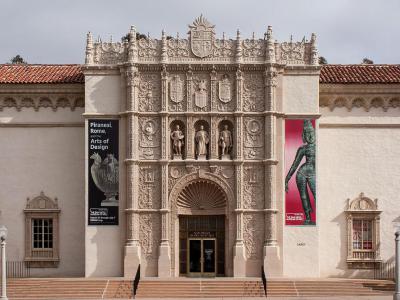 The museum building was designed by architects William Templeton Johnson and Robert W. Snyder in a plateresque style to harmonize with existing structures from the Panama–California Exposition of 1915. The dominant feature of the façade is a heavily ornamented door inspired by a doorway at the University of Salamanca. The Cathedral of Valladolid also influenced the museum's exterior design, and the architects derived interior motifs from the Santa Cruz Hospital of Toledo, Spain.

The Museum's collections are encyclopedic in nature, with pieces ranging in date from 5000 BC to 2012 AD. The museum's strength is in Spanish works by Murillo, Zurbarán, Cotán, Ribera and El Greco. The museum also houses works by Italian masters Giorgione, Giambattista Pittoni, Giotto, Veronese, Luini, Canaletto, and works by Rubens, Hals and van Dyck from the Northern European School.

Tip:
If you go into the somewhat new "Visible Vault" collection on the entry level you'll get a good overview of the museum and find some treasures, such as the Binney collection of South Asian miniatures. You can dine in Panama 66, SDMA's outdoor cafe with adjacent sculpture garden at one end of the plaza, or catch a quick bite from one of the vendors to eat under one of the many umbrellaed tables around the water fountain.