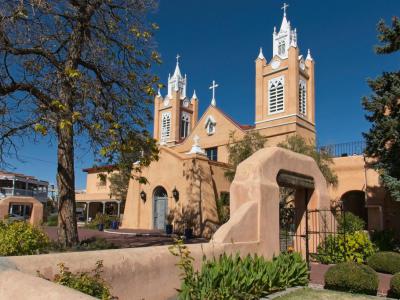 The San Felipe de Neri Church is a catholic church in the historic Old Town area of Albuquerque. The church was built in 1793, making it one of the oldest surviving buildings in the city.

The origins of San Felipe de Neri Church date to 1706 when a church was dedicated first to Francis Xavier, and then later to St. Philip Neri. That church stood for nearly 90 years when it collapsed due to disrepair.

Another church was immediately built on the site. That church is the one that worshipers continue to visit today. It was built at the behest of Fernando de la Concha, who was governor of New Mexico at that time.

San Felipe de Neri is a single nave church with thick adobe walls and wood furnishing. It underwent a drastic remodel in the 1860s, which added twin bell towers and gothic interior furnishings. Even more refurbishments took place in 1916, which is when the pressed tin ceiling was added.

Over the years, additional buildings were added to the church grounds. These include the rectory, a barn, a stable and a parish hall. Our Lady of the Angels School was added in 1878. It was Albuquerque's first public school.

The Sister Blandina Convent was constructed in 1881 and was used as a convent through the 1970s. It is now used as a gift shop and museum.

Visitors who wish to see San Felipe de Neri Church are welcome to attend services or stop by the museum. Though the church is only open during hours of service, visitors can admire the exterior architecture of the buildings at any time.

Tips
The museum and gift shop hours are irregular. Mass is held on Monday, Tuesday, Wednesday, Friday at 7 AM; Saturday at 4 PM; and Sunday at 7 and 11 AM.
Image by Jim & Robin Kunze on Flickr under Creative Commons License.