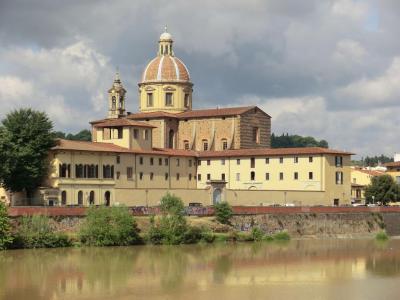 One of the lesser visited attractions in the city of Florence is the San Frediano in Cestello. This beautiful structure represents the late Baroque style of architecture.

The present church is built on the same site as the monastery of Santa Maria degli Angeli that was founded in 1450. In the early seventeenth century, the church was occupied by the Cistercians, which is where the word, ‘cestello’ is derived from. By the end of the seventeenth century, the church was commissioned for renovation under architects Gherardo Silvani and Giulio Cerutti. Work on the new design started in 1680 and by 1689 the construction was abruptly stopped leaving the façade that faced the Arno River and the town unfinished. Like many other churches in Florence, the façade of the San Frediano also remains incomplete till this present day.

Although Florentine churches may not have much in terms of craft and design on the exterior, the interiors are sure to mesmerize you the minute you step in. This is also seen at the San Frediano. The interiors of the church showcase the late Baroque style and design. The dome of the church is embellished with ornate frescos that were contributed by some great artists like Anton Domenico Gabbiani, Matteo Bonechi, Alessandro Gherardini and Antonio Puglieschi.

Today, the San Frediano in Cestello is converted into an Archiepiscopal Seminary, which is still very active.
Image by Mattana on Wikimedia under Creative Commons License.
Sight description based on wikipedia