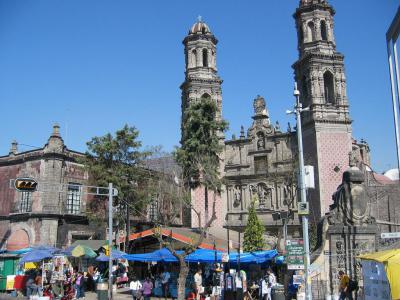 Situated near the northwest corner of the Alameda, this church was built to commemorate the conquest of Tenochtitlán by the Spanish. On the 13th of August 1521, San Hipólito's Day in the Catholic Calendar, the Spanish overcame the Aztecs at this very spot; nevertheless, they suffered heavy casualties and the chapel was built as a monument for those killed in the battle. Unsurprisingly, too, San Hipólito became the patron saint of Mexico City, and is here represented as a triumphal Hernán Cortés astride the Mexican eagle, which, in turn, is standing on a prickly pear cactus. The two praying figures are Moctezuma, who is leading the indigenous population, and Pedro de Alvarado, who leads the "conquistadores".

Built partially with uncoated "tezontle" volcanic rock, San Hipólito was completed in the 1730s. Baroque in style, its two towers in front have a unique 45-degree angle, while the main bell tower has a Moorish design and so do the interiors. The floor plan, however, is a classic Latin cross with the central dome rising at the crossing point.

Locals gather here because the main altar inside contains a shimmering statue of San Judas – the patron of lost and desperate causes. The saint's annual feast day, October 28, is the biggest religious party in Centro by a wide margin. Believers adorn their San Judas statues with beads, threaded necklaces, colored lace, scapulars, and roses.