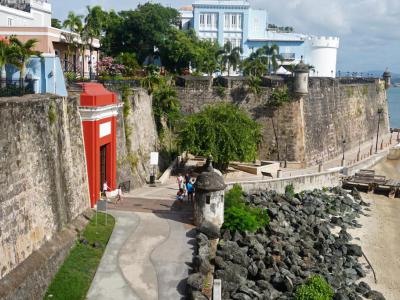 Built in the late 1700s, San Juan Gate is a giant (40 feet) doorway, the last remaining of the original five gates carved into the three-mile wall that once surrounded the city. Presently, the wall wraps around Old San Juan from the cruise-ship piers on San Juan Harbor to the capitol on the Atlantic.

Originally, each gate had a designated function. This red gate of San Juan played a symbolic role of main entrance to the city, and was named in honor of Saint John the Baptist. The first thing you notice approaching it is the inscription of The Sanctus (“Holy”) hymn from Catholic liturgy.

The city wall is the most enduring symbol of Puerto Rico, built by the Spanish between 1539 and 1782. Made of sandstone, rubble, and mortar blocks 20 feet thick, the wall measures 45 feet wide and 40 feet high in some spots, and was meant to protect San Juan from invaders, notably the English, the Dutch, and the Americans. Its iconic sentry boxes now symbolize the island’s Spanish heritage and resilience in an ever-changing world.

Nearly impenetrable to foreign attack, the city wall has proved defenseless against modern automobile traffic, pollution, and misguided attempts to preserve it that have seriously endangered the wall, leaving it crumbling in some places.

Currently a National Historic Site, the city wall is maintained by the National Park Service attempting to recreate the magic mixture of sand, water, and limestone used to stucco the wall. Along with the adjoining fortresses of El Morro and San Cristóbal, the city wall attracts 1.2 million visitors annually.

Tip:
As you walk through the gate, pause and notice how thick the city walls are. As soon as you pass, look out for street vendors on the corner offering refreshments including Puerto Ricans’ favorite, piragua.
Image by Mariordo (Mario Roberto Durán Ortiz) on Wikimedia under Creative Commons License.