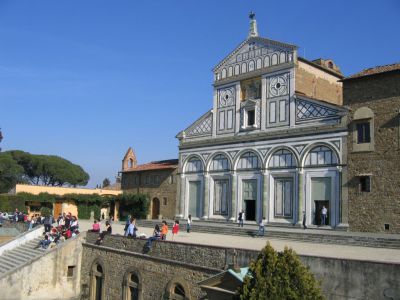 Standing atop one of the highest points in Florence, San Miniato has been described as one of the finest Romanesque structures in Tuscany and one of Italy's most beautiful churches. Though it's not easy to get to in case of limited mobility, it makes a very nice combination with Piazzale Michelangelo, and is completely free to visit along with the adjoining Olivetan monastery seen to the right of the basilica, when ascending the stairs.

An Armenian prince serving in the Roman army under Emperor Decius, St. Miniato or Minas was denounced as a Christian after becoming a hermit and was brought before the Emperor who ordered him to be thrown to beasts in an amphitheater where a panther was called upon him but refused to devour him. Eventually beheaded in the presence of the Emperor, he is alleged to have picked up his head, crossed the river Arno and walked up the hill of Mons Fiorentinus to his hermitage. A shrine was later erected at this spot followed by a chapel in the 8th century.

Construction of the present basilica was financed by a clothe merchants' guild who were responsible for the church's upkeep. Tuscan Romanesque in style, complete with beautiful mosaic decorations, superb marble inlay altar, and even a “pagan” horoscope, it is quite a spectacular sight with many pieces created by some of the finest artists in Florence.

Once you have explored the church, it's interesting to poke around the rather surreal and intriguing cemetery that houses some very old and elaborate tombstones, including those of many important city residents, such as Carlo Collodi of “Pinocchio” fame.

Last but not least, the small gift shop on the premises carries a wide assortment of interesting gifts, such as herbal liqueurs, honey, herbal teas, and high-quality medicinal tinctures prepared by the Olivetan monks.

Tip:
At 5:30pm, you can join or observe the mass which is in Latin and Italian with all the hymns sung by the priests. By 6:30 pm, the monks come out to chant their vespers, too!
And, of course, make sure you go behind the church to view the city in all of its glory!