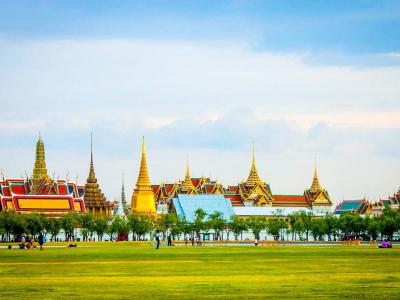 Sanam Luang is a public field in front of the Temple of the Emerald Buddha and the Grand Palace in Bangkok. Originally known as Thung Phra Men (the royal cremation ground), the location's prime designation, since its inception under the reign of King Rama I, was to hold cremations of the kings, queens and princes.

During the reign of King Rama III (1824-1851), amid the war against Vietnam over the Cambodian border, in order to project the image of Thailand as a fertile and flourishing country, the area was cultivated as a rice plantation.

In 1855, King Rama IV changed the field's name to Thong Sanam Luang, which has since been commonly shortened to Sanam Luang. The king also set up a place for the Royal Ploughing Ceremony, establishing a hall for the image of Buddha, a number of pavilions and a stage for the ritual of propitiating the gods.

His successor, King Rama V, pulled down these structures and enlarged Sanam Luang to create space for the centennial celebration of Bangkok, in 1897. Following a visit to Java, and being impressed with the sultan's palace gardens, he also ordered to plant two rows of tamarind trees around the field.

Over the years, Sanam Luang has been used for a variety of purposes including as a ground for kite flying, racetrack, and a golf course. In addition to the Ploughing Ceremony and Calling of the Rain in May taking place every year, the Bi-Centennial Celebration of Bangkok in 1982 and the grand celebration of the Golden Jubilee Royal Ceremony in 1996 were held here.

Notwithstanding these, Sanam Luang continuously serves as a royal cremation ground: in 1950 for King Ananda Mahidol, Queen Savang Vadhana in 1956, Queen Rambhai Barni of King Rama VII in 1986, Princess Mother Srinagarindra in 1996, Princess Galyani Vadhana in 2008, and Princess Bejaratana Rajasuda in 2012.

Following the death of King Bhumibol Adulyadej, on 13 October 2016, massive crowds flooded Sanam Luang to pay their respects to the late king. His cremation took place on 26 October 2017.
Image Courtesy of Wikimedia and Uthen Smantai.
Sight description based on Wikipedia.