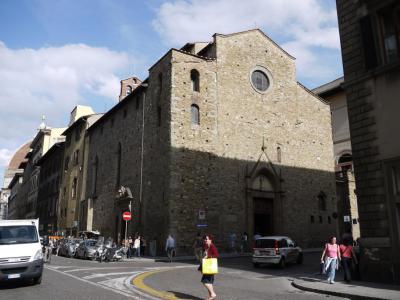 Originally constructed in the 11th century, Santa Maria Maggiore di Firenze is not as glamorous as other Florentine churches but beautiful nonetheless. In the 13th century, it underwent extensive Gothic-style renovations to the facade and sides; however, the exterior remained rather undecorated, with stone walls and the portals surmounted by tympani. The bell tower, although reduced in height, survives from the Romanesque building. It appears to have the head of a woman – popularly known as Berta – embedded in its walls.

The interior, restored in the 17th century, is simple with a nave and two aisles, ogival arches and groin vaults. Artworks include frescoes by Bernardino Poccetti, a Nativity by Matteo Rosselli, and, above the altar of the left transept chapel, a polychromed stucco relief panel, the Madonna del Carmelo, long attributed to the 13th-century artist, Coppo di Marcovaldo. If you need a place to rest and/or pray peacefully, this off-tourist-path church is the right place in Florence.

***DANTE'S FLORENCE TOUR***
In the church chapel, look for the tomb of accomplished scholar and philosopher Brunetto Latini, who at one time was Dante's mentor, having introduced him to the authors of antiquity. Latini was also one of the most significant of Florentine political figures and as such was a role model for the aspiring poet concerned with his city's political life. Certainly Dante admired his teacher and held him in high esteem, though in his Comedy, for some unclear reason, he sticks Latini in the seventh circle of Hell, among the sodomites.

Located in the very heart of Florence’s Historic Center, the Duomo area is deservedly considered the city’s religious and civic center, with many famous landmarks to be found. The most prominent of these is the breathtaking sight that is the Cathedral, also known as the Duomo, built on the site of a 7th-century church. Its magnificent Renaissance dome was designed by Filippo Brunelleschi, a...  view more