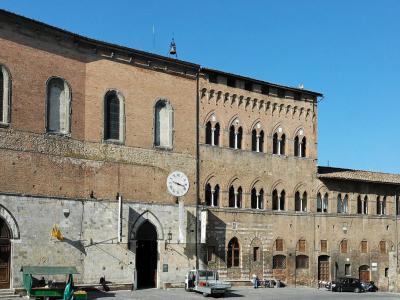 Santa Maria of Scala was one of Europe's first hospitals. Today a museum, it was once an important civic hospital dedicated to caring for abandoned children, the poor, the sick, and pilgrims. Most of its operating budget was from bequests and donations from the wealthy citizens of Siena. The head of the hospital was the rector who managed the lay brothers responsible for its operation.

According to local legend, it was founded by a shoemaker on the land donated by him and later managed by Siena Cathedral. In the 15th century, the city of Siena took over its management. The old hospital building had interiors covered with frescoes by Sienese masters of which only a few remain today. The windows are covered with the oldest Italian manufactured stained glass dating back to 1288. The museum is the third largest repository of art and sculpture in Siena.

The rooms in the basement house the National Archeological Museum with objects from excavations around Siena. The main ward room that once contained beds for patients has walls covered with frescoes depicting the history of the hospital. There is also an impressive collection of works by Sienese artists in the other rooms. The museum also holds themed temporary exhibitions from time to time.