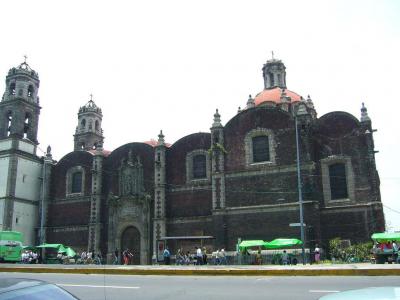 The old Santa Veracruz Monastery in Mexico City's historic center was the third most important church in the area in the 16th century, and maintains its original function, whereas the former monastery building and hospital now house the Franz Mayer Museum. Most of the church's interior decorations are gone, but it is still home to two important images, the Christ of the Seven Veils and the Virgin of the Remedies ("La Gachupina"). From the outside, you will notice that its twin steeples are tilting in different directions. The soil under Mexico City is notoriously spongy, resulting in drunken-looking structures.

Shortly after the Conquest, Hernán Cortés founded the Brotherhood as an act of gratitude for the successful arrival of the Spanish on the American mainland. The original members were conquistadors; later, memberships were restricted to aristocrats and others with noble titles, but eventually were open to anyone with sufficient money and clout. Those who belonged to the organization wore a large red cross on their chest and a crucifix with an image of the Christ of the Seven Veils on two small tablets with the Ten Commandments. The members' main duty was to accompany prisoners to jail and those condemned to death to the gallows, for whom they also paid the funeral and burial expenses. To commoners, this brotherhood was known as the "Knights of the (straw)Mats" as the prisoners were buried in the cheapest way possible.
Image by Pablo Fossas on Wikimedia under Creative Commons License.