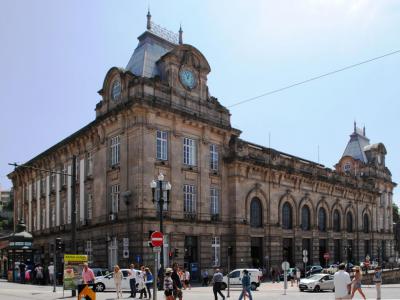 The São Bento Railway Station is an integral part of the Historic City Centre of Porto, a UNESCO World Heritage Site and a National Monument of Portugal.

The building took roughly a dozen years to construct, starting from 1904, and was designed by the architect, José Marques da Silva. Its vestibule is richly adorned with large panels of azulejo tile, created by Jorge Colaço. Framed by pilasters, these panels were completed in 1916, just in time for the station inauguration.

There are approximately 20,000 azulejo tiles there altogether. The large ones depict historical moments in Portuguese history, such as the Battle of Arcos de Valdevez, the Conquest of Ceuta (1415), the meeting between the knight Egas Moniz and Alfonso VII of León in Toledo (12th century), the entrance to Porto by King John I and Philippa of Lancaster, on horseback, to celebrate their wedding (1387), and others.

On the border wall, at the entrance, there are small panels depicting rural scenes, such as a cattle fair and pilgrim camp, vineyards, harvest, wine shipment down the river Douro, and a watermill. On the pilasters, separating the entry doors, there are series of smaller compositions.

Near the ceiling is a blue and gold frieze decorated with stylized flowers, while below them is another polychromatic, Art Deco-style frieze depicting the history of transportation in Portugal.
Image by HombreDHojalata on Wikimedia under Creative Commons License.
Sight description based on wikipedia