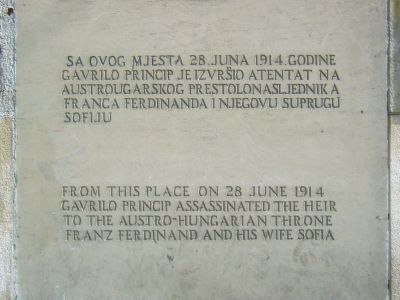 On 28 June 1914, Archduke Franz Ferdinand of Austria, heir presumptive to the Austro-Hungarian throne, and his wife, Sophie, Duchess of Hohenberg, were shot dead in Sarajevo, by Gavrilo Princip, one of a group of six Bosnian Serb assassins coordinated by Danilo Ilić. The political objective of the assassination was to break off Austria-Hungary's south-Slav provinces so they could be combined into a Greater Serbia or a Yugoslavia. The assassins' motives were consistent with the movement that later became known as Young Bosnia. Serbian military officers stood behind the attack.

Thus, in that very place, in front of Sarajevo City Museum, where the assassination took place, a memorial plaque has been built into the wall.
Image Courtesy of Wikimedia and Michael Büker.
Sight description based on Wikipedia.