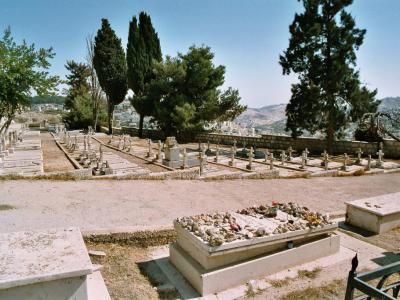 Across the road from the Chamber of the Holocaust, at the end of the path is a Christian cemetery, where the grave of German-born Oskar Schindler (1908–1974) is located. During the Second World War, this industrialist – a Nazi Party member – made every effort to use Jewish prisoners as laborers in his enamelware and ammunitions factories, thus saving 1,200 people from almost certain death in the gas chambers. He continued to bribe SS officials to prevent the execution of his workers until the end of WWII in Europe in May 1945, by which time he had spent his entire fortune. After the war, Schindler was supported by assistance payments from Jewish relief organizations, thus receiving a partial reimbursement for his wartime expenses. Having become a symbol of the fight against the Holocaust, he is the subject of the 1982 novel "Schindler's Ark" and the Oscar-winning 1993 film adaptation, "Schindler's List".

Schindler's grave in the Catholic Franciscan cemetery on the southern slope of Mount Zion is visited by Jews, Christians and people of no religious faith. You can spot his tomb out amongst others as it will likely have reeves, flowers and a great many stones placed upon its top.

Tip:
The grave is around 7-8 mins walk from the Church of St. Peter in Gallicantu and 4-5 mins walk to King David's Tomb, the Dormition Abbey, and the Room of the Last Supper if you want to combine with visits to other attractions on Mount Zion.
Image by Michael Panse on Flickr under Creative Commons License.