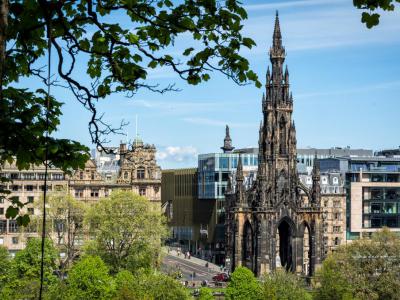 Sir Walter Scott was perhaps Scotland’s best-loved poet and novelist, so it is only natural that the nation wanted to pay homage to him, and they surely did so with the Scott Monument in Princes Gardens.

Upon Scott's death in 1832, an architectural competition was launched to build a monument in his honour. A great many noted architects submitted their ideas; the winning design was by George Meikle Kemp, a draughtsman who had no architectural experience and had submitted his design under the name of John Morvo, a 15th-century stonemason and architect.

The 61-metre high monument has several viewing galleries accessed by narrow winding stairways. The highest gallery is reachable by climbing 287 stairs, so if/when you get to the top, you are given a certificate proving that you have indeed survived the climb!

The monument was built out of Binny Sandstone, a substance so oily that it attracts dirt very fast, so that a year after the construction was finished, it looked as if it had been there for centuries. The American author, Bill Bryson described it as a “Gothic rocket-ship”.

The lovely marble statue of Sir Walter, seated with his writing implements and his faithful dog at his feet, was sculpted by John Steell. The 64 statues decorating the monument feature characters from Sir Walter’s books. You will also see many grotesques – those hideous character faces so beloved by Gothic architects, which Kemp included in his design to add to the monument’s “ancient” appearance.

Why You Should Visit:
To enjoy the monument casually at its base, or to climb up for a 360-degree panorama view (note a fee attached to that).

Tip:
It might be good to know – especially if you are claustrophobic – that this gets a little tight, especially if other climbers happen to be going in the opposite direction.