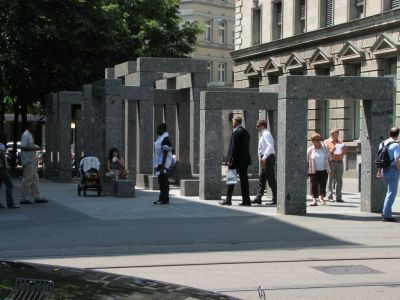 Max Bill was a Swiss architect, painter, designer and artist. The Pavillon-Skulptur is located adjacent to the Bahnhofstrasse. It was constructed in 1983 and depicts arches, plinths and pillars in granite. This sculpture is one of the most visible of Max Bill’s work and shows his preference for clean, straight lines. Like all large sculpture pieces, it raised a lot of controversy at the time, as it was a very modern sculpture in an area that was hundreds of years old. Bill started out as a silver smith and then took up study at the Bauhaus, where he learned from Kandinsky, Klee and Sclemmer. Following his time at the Bauhaus, he moved to Zurich. It is said that since 1950s, Bill was the most influential person in Swiss graphic design. He was also an industrial designer, and his work was characterized by precise proportions. In 1953, Bill founded the Ulm School of Design with Inge Aicher-Scholl and Otl Aicher. Bill also served on the Federal Arts Commission for eight years. He served as the chair of environmental design at a Hamburg academy.
Image by Matt Mechtley on Wikimedia under Creative Commons License.