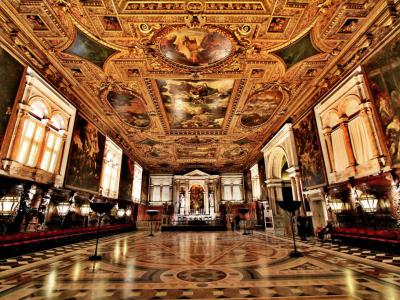 The religious fraternity (scuola) of Saint Roch, or Rocco, was set up in Venice in 1478. Seven years later, the body of the saint was brought from Germany, which ensued a boom of donations so great that in 1489 the fraternity acquired the status of “scuola grande”. In 1527, the city was hit by an outbreak of plague and the scuola’s revenue rocketed to record highs with the money pouring in from those desperate to secure St Rocco's protection from the disease. This financial intake eventually paid for the construction of the current building complete with the amazing paintings inside.

Indeed, no other Venetian fraternity is as richly decorated as Scuola Grande di San Rocco. The man responsible for it is Venice's own 16th-century artist Tintoretto. Born Jacopo Robusti, the painter got this nickname, which means "little dyer" or "dyer's boy", because of his father, who was a dyer (tintore). Also nicknamed Il Furioso ("The Furious") for his phenomenal energy in painting, Tintoretto was admired and equally criticized by his contemporaries for the unprecedented boldness of his brushwork as well as for the speed with which he painted. Nonetheless, it took him three decades to complete this project – from its inception, when Tintoretto was 46, until his death, in 1594, at the age of 76.

Over the said period, the artist had created more than 50 epic canvases for the walls and ceilings of the scuola, earning it a hyperbole reference among critics as “one of the three most precious buildings in Italy” for the overwhelming effect it produced. Although the Tintoretto cycle begins with the “Annunciation”, located in the lower room, to appreciate his progression as an artist, it is best to start in the smaller room, on the upper floor, called Sala dell’Albergo, housing the “Crucifixion” painting, which truly reveals the full magnitude of Tintoretto's masterhood.

Among other highlights here are the New Testament scenes, in the main upper hall, defying every convention of perspective, lighting, and color – a feat of relentless inventiveness that has very few equals in the Western art. Notwithstanding that Tintoretto was in his late 60s when he came to paint these scenes, they prove to be some of his finest creations.

Why You Should Visit:
Rarely busy or crowded – an oasis of peace, culture and Venetian history.
Photos don't do it justice. You can't help being overwhelmed by what you see.

Tip:
Make sure to get an audio guide as there are no descriptions.
Wear warm clothes (it gets quite cold inside) and take your camera.
The mirrors in the chapter room allow you to study the ceiling art without having to strain your neck.