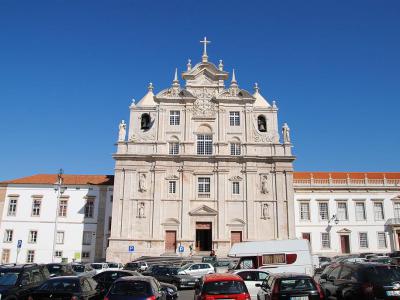 Pombal was Chief Minister of King Joseph I. He had banned the Jesuits for their possible involvement in the attempted assassination of the King. He was a liberal reformer who effectively ruled Portugal during the reign of Joseph I.

The basic style of the cathedral is Baroque in the upper part of the facade and Mannerist in the lower part. Niches of the facade hold statues of four Jesuit saints. They were the only Jesuits not evicted by Pombal. There are two bell towers immediately behind the facade and a dome atop the transept.

The inside of the cathedral has barrel vaults, a nave with chapels and a dome and cupola. There are enormous gilded wood altarpieces from the 17th century in the arms of the transept and the main chapel. The side chapel altarpieces are Mannerist and Baroque.

Choir stalls in the main chapel and the carved baptismal font were taken from the Old Cathedral. The carvings were made in the 16th century Gothic-Manueline style by Pero and Felipe Henriques.
Image Courtesy of Wikimedia and Leandro Neumann Ciuffo.