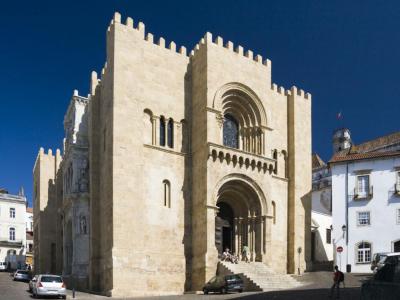 Old Cathedral of Coimbra is the only Portugese Romanesque cathedral which has survived intact. Construction began after the Battle of Ourique in 1139. Prince Afonso Henriques had declared himself King of Portugal. He chose Coimbra to be his capital. Sancho I, second King of Portugal was crowned in the cathedral in 1185.

Building the cathedral was slow going. The basic structure was not finished until the early 13th century. The cloisters were not begun until 1218. The plans and construction of the cathedral are generally credited to a mysterious Master Robert, a French architect. The works were directly supervised by another mysterious Master Bernard.

The Old Cathedral has the look of a little fortress. It has high crenelated walls with almost no windows. A high tower in the west facade, showing Romanesque and Arabic elements, is reinforced by heavy buttresses at the corners. The north facade has a renaissance portal by sculptor Jean of Rouen.

The capitals of the Romanesque decorations feature stone carvings of birds and four-footed creatures and birds but no human figures. Most of the artisans that worked on the Old Cathedral were mozarabic. They were Christians who had lived and worked in Arab lands. They were not used to human representations, which were banned under Islam.
Image Courtesy of Wikimedia and Digitalsignal.