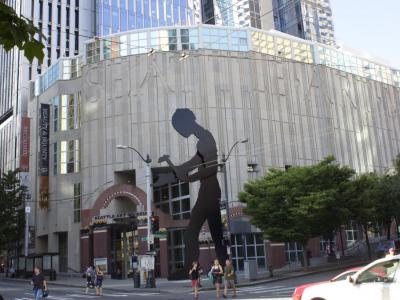 Architect Robert Venturi, winner of the prestigious Pritzker Prize, was credited with making the wry observation that "less is a bore". You can judge for yourself if you agree by visiting the museum he co-designed with his wife Denise Scott Brown. Commonly known as SAM, this downtown building is just one of the Seattle Art Museum's three sites; the other two being the Seattle Asian Art Museum and the Olympic Sculpture Park.

The exterior of SAM is clad with limestone, terracotta, marble, and granite, featuring a Hammering Man that hammers four times a minute from 7am to 10pm (he rests his arm each evening). Inside, the grand staircase and galleries also uphold Venturi's belief that "civic architecture should be popular; it should be liked by a range of people. It should not be esoteric."

Galleries in the museum are devoted to collections that include Japanese art, African art, and Pacific Northwest tribal art, plus special exhibitions from around the world. A major expansion completed in 2007 saw the gallery space increase by 70%, enabling SAM to attract large, high-profile exhibitions and to add a very good restaurant and wonderful store.

Why You Should Visit:
Calming and relaxing gallery with a very nice permanent collection. Selections from heavy hitters while dedicating ample space to Pacific Northwest-style art and culture – including a great introduction to Alaskan art and totems.
The museum is particularly strong on modern art: both non-representational and representational. Strong, too, in 3D works. Add to this the very good museum shops, amongst which a gallery where local artists exhibit and the works are for sale.

Tip:
Don't miss the sculpture in front, the Hammering Man that hammers four times a minute from 7am to 10pm. He rests his arm each evening, and all day on Labor Day.

This sight is featured in a self-guided walking tour of Seattle, Washington within the mobile app "GPSmyCity: Walks in 1K+ Cities" which can be downloaded from iTunes App Store or Google Play. Please download the app to your mobile phone or tablet for travel directions for visiting this sight. The app turns your mobile device to a personal tour guide and it works offline, so no data plan is needed when traveling abroad.