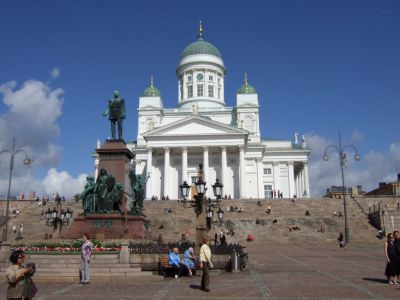 Senate Square, or Senaatintori, is a city square surrounded by beautiful Neo-Classical buildings. The square and its buildings are the oldest part of Helsinki. The structures on the square include the Cathedral, the main building of the University of Helsinki, the Government Palace, and the Sederholm House dating from 1757.

The square is built on the site of a 17th and 18th-century graveyard. The city plan, designed by Johan Albrecht Ehrenström, designated the square in 1812. By 1822, the Government Palace was completed. The Senate of Finland met there until the Council of State replaced it in 1918. Today, the building is used by the Prime Minister and Cabinet officials.

The University Building was constructed in 1832. But the most dominant building in the square is by far the Helsinki Cathedral. It was designed by Carl Ludvig Engel but was not completed until 12 years after his death. It was initially called the Church of St. Nicholas.

Walter Runeberg carved the central statue of Emperor Alexander II in 1894. During the Russian years, the Alexander statue was a symbol of resistance. People would leave flowers under the statue as a gesture of protest against Alexander's grandson, tsar Nicolas II. Alexander was known locally as "the good tsar."

The square is the site of the oldest buildings in Helsinki. The Cathedral is especially worth seeing as it is one of the most iconic buildings in the city. From the stairs to the Cathedral, be sure to take in the view of the city all around.

Every day a digital carillon plays at 17:49. The acoustically best spot to hear the piece is at the central statue of Alexander II.

If visiting in the wintertime, the Helsinki Christmas Market is held every December in Senate Square.

The square has appeared in many movies, including many scenes that were supposedly set in Russia. By omitting the distinctive Cathedral from his shots, Warren Beatty convincingly used Senate Square as a substitute for Soviet St. Petersburg in the 1981 film Reds.
Image Courtesy of Wikimedia and Paramecium.