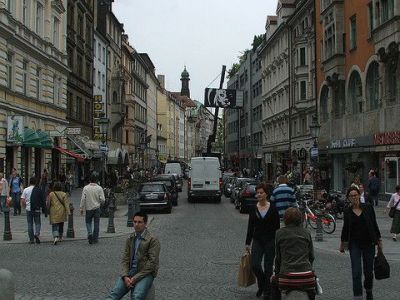 Clearly one of the most typical, as well as one of the oldest and most important shopping districts of Munich, the small street of Sendlinger extends from Marienplatz to the medieval Sendlinger Tor city gate in the south of Aldstat (The Old Town). The street was named after its original destination, Sendling, the first place in the 14th century, after the Sendlinger Gate, outside of Munich's city walls, to which it had led.

In the post-war period, the Munich red light milieu, which had already migrated a while back, was found here. Over the years the sidewalks of Sendlinger Strasse have increasingly widened and the roadway for vehicles correspondingly narrowed. In 2009, the city council of Munich decided to make a section of about 120 meters between Hackenstrasse and Färbergraben a pedestrian zone.

As more and more of Sendlinger Street is being converted to pedestrian zone, it becomes more of a shopping pleasure, abundant in small stores selling antiques, handicrafts, books and jewelry – an ideal place to go if you are looking for an unusual gift or arty poster. Most of these shops are family-run businesses that have survived for generations. In order to expand the range of shops, courtyards have been developed, such as the "Asam Hof" next to the Asamkirche or the "Hofstatt" on the former site of the Süddeutscher Verlag.

Adding to the ample shopping opportunities in Sendlinger are plentiful little cafés and restaurants where you can sit down, relax, and enjoy the evening.
Image Courtesy of Flickr and dustpuppy.
Sight description based on Wikipedia.