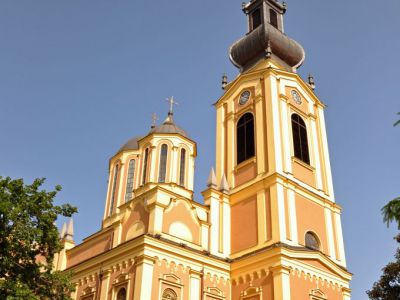 The Cathedral Church of the Nativity of the Theotokos is the largest Serbian Orthodox church in Sarajevo and one of the largest in the Balkans. The cathedral is dedicated to the nativity of the Theotokos. It was erected at the request of the Orthodox parish of Sarajevo between 1863 and 1868. The church is constructed as a three-section basilica inscribed in a cross-shaped plan, and has five domes. The domes are built on the beams; the central one is much larger than the other four side domes. The church is arched by round elements. The small gilded baroque-style belfry is built in front of the entrance. The interior walls are decorated by painted ornaments. In the lower zones of the walls the painted ornaments are simulating the marble stone construction look. Arches and vaults are decorated in ornaments only. In 1898, the Orthodox Metropolitan Palace was built near the cathedral.

The head master for construction was Andreja Damjanov, a man from the Damjanovi-Renzovski family of master builders, masons, painters, iconographers, carpenters and stonecutters from the village of Papradishte near Veles, Macedonia.
Image Courtesy of Wikimedia and Jennifer Boyer.
Sight description based on Wikipedia.