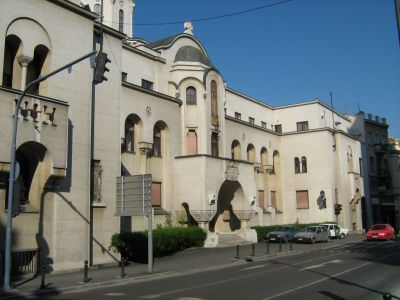 The Serbian Orthodox Church, founded by the Archbishop Saint Sava, was recognized as autocephalous by Constantinople in 1219. The status of the Serbian Orthodox Church grew along with the growth in size and prestige of the medieval Kingdom of Serbia. After King Stefan Dušan assumed the imperial title of tsar, the Archbishopric of Peć was correspondingly raised to the rank of Patriarchate in 1346. In the century that followed, the Serbian Church achieved its greatest power and prestige. In the 14th century Serbian Orthodox clergy had the title of Protos at Mount Athos. In 1459, the Ottoman Empire conquered Serbia and made much of the former kingdom a "pashaluk". Although some Serbs converted to Islam, most of them retained their adherence to the Serbian Orthodox Church. The Church itself continued to exist throughout the Ottoman period, though not without some disruption. After the death of Patriarch Arsenios II in 1463, a successor was not elected.
Image by Djordje Stakić on Wikimedia under Creative Commons License.
Sight description based on wikipedia