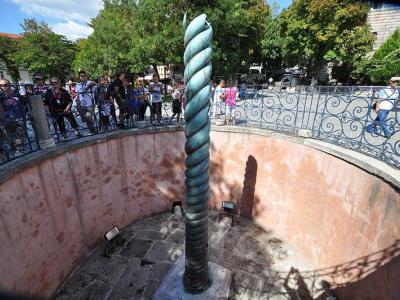 To raise the image of his new capital, Constantine and his successors, especially Theodosius the Great, brought works of art from all over the empire to adorn it. The monuments were set up in the middle of the Hippodrome, the spina. Among these was the Tripod of Plataea, now known as the Serpent Column, cast to celebrate the victory of the Greeks over the Persians during the Persian Wars in the 5th century BC. Together with its original golden tripod and cauldron (both long missing), it constituted a trophy or offering reminding of a military victory, dedicated to Apollo.

Constantine ordered the Tripod to be moved from the Temple of Apollo at Delphi and set in the middle of the Hippodrome. While it appears that the golden cauldron was never brought to Constantinople, the serpent heads and top third of the column were destroyed in 1700; parts of the heads were recovered and are displayed at the Istanbul Archaeology Museum.

All that remains of the monument today is the base, located near the Walled Obelisk and the Egyptian Column in Sultanahmet Square, a popular tourist spot in Istanbul.

Tip:
The column in its complete form is depicted in several paintings on display at the nearby Hagia Sofia.
Image Courtesy of Wikimedia and Jorge Láscar.