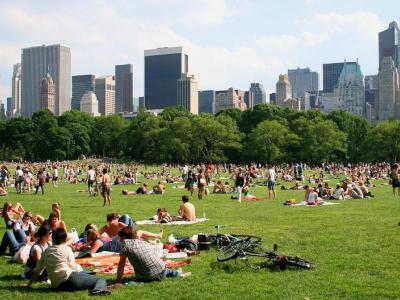 Sheep Meadow is the best spot in Central Park to lay out for a summer afternoon. It's close to the bathrooms, has enough room to throw a ball or stretch out and is close to a food option if you find yourself peckish. It's also a beautiful place where one can see the seasons change from spring through fall, with the city's towering skyscrapers in the background. Folks of all flavors can be found here playing games, dancing, picnicking, sunbathing, reading, web-browsing (over wi-fi) and napping; there's something for everyone.

With an expanse of 15 acres, the meadow was originally designed as a parade ground and became part of the park in 1864; however, park commissioners soon instituted a ban on military parades and, instead, introduced hundreds of sheep to enhance the park's "romantic English quality" and to quietly fertilize the lawn. The sheep were housed in a fanciful Victorian-style sheepfold created in 1870, and twice a day a shepherd would stop traffic as they traveled between the sheepfold and the meadow. After the sheep were removed in 1934, the sheepfold was converted into what later became the Tavern on the Green restaurant. Starting in the 1960s, the meadow was used for events of unprecedented scale. Concerts, Vietnam War protests, and hippie "love-ins" and "be-ins" were attended by hundreds of thousands of people.

Sheep Meadow is reportedly one of the only open areas of Central Park "free of glare from local lighting and where almost the entire sky can be seen". Bring a blanket (+food) and you can spend hours enjoying the fresh air and greenery all around.

Tip:
If staying late, keep watch of when they start locking the gates, or you might find yourself jogging to the meadow's very furthest side in order to exit.