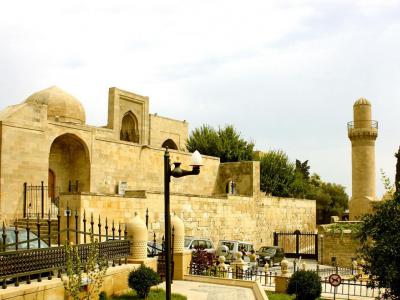 Palace of the Shirvanshahs is the biggest monument of the Shirvan-Absheron branch of the Azerbaijan architecture, situated in the Inner City of Baku. The complex contains the main building of the palace, Divanhane, the burial-vaults, the shah's mosque with a minaret, Seyid Yahya Bakuvi's mausoleum, a portal in the east - Murad's gate, a reservoir and the remnants of the bath-house.

The main building of the complex was started in 1411 by Shirvanshah Sheykh Ibrahim I. The two-storey building of the palace numbers about 50 different dimensions and outlines of the constructions connected with 3 narrow winding staircases.

Divankhana is a small stone pavilion. It is situated inside a small courtyard surrounded by a gallery-arcade on three sides.

The Mausoleum of the Shirvanshahs is of a rectangular shape and crowned with a hexahedral cupola which is decorated from outside with multi-radial stars.

The Palace Mosque (1430s) is situated in the lower court of the complex. The laconicism of its prismatic volumes, completed with two slightly pointed cupolas, is shaded by a well-proportioned vertical line of the minaret rising above in the north-eastern corner of the building.
Image Courtesy of Wikimedia and Frokor.
Sight description based on Wikipedia.