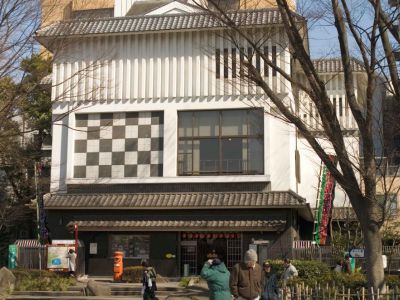 The Shitamachi Museum showcases life of working class Japanese in Tokyo during the 1920s and 30s before World War II. It seeks to preserve a way of life that has all but disappeared today.

Shitamachi was the lower plain near Edo castle. Merchants, craftsmen, sailors and fisher folk lived in small wooden tenements in the location. Asakusa is the last remaining area that resembles the Shitamachi, today. The museum paints a realistic picture of life and the culture of old Edo through original exhibits donated by erstwhile residents. It was opened to the public in 1980.

The Shitamachi Museum has two levels. At the entrance is a replica of a house of a merchant who made and sold wooden clogs called Geta including a hand pulled cart or rickshaw used in old Edo. There is also an old tenement shared by two families who own shops. A well and washing board resembling the ones used in old Edo are found near the house. The second floor has individual exhibits including toys, artifacts, kitchen utensils, board games and pots and pans used during festivals. A notable exhibit is the entrance to a Japanese public bath called the Sento that was a donation by the original owner.

Opening hours: Tuesday - Sunday: 9:30am - 4:30pm
Image by Tarourashima on Wikimedia under Creative Commons License.
Sight description based on wikipedia