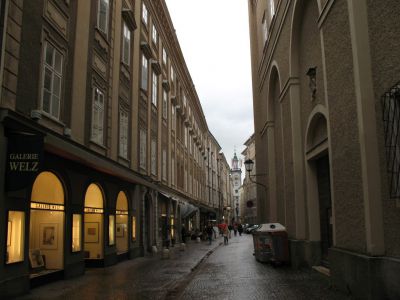 The Sigmund Haffner Gasse is one of the oldest streets in Salzburg. The buildings flanking the street were once homes of wealthy merchants and the 700 year old Elefant Hotel is located here.

The Sigmund Haffner Gasse is a wide street that connects two other important streets, the Getreidegasse and the Franziskanergasse. The Old City Hall marks the lower end of the street and the Franciscan Church is at the upper end. The street was laid in 1140 when the Franciscan Church was made a parish church. Before 1620, the street marked the end of the merchants residences and the St. Peter’s Convent. It is named after Sigmund Haffner, a wealthy merchant and benefactor in Salzburg who was its mayor between 1768 and 1772.

Important buildings on Sigmund Haffner Gasse are the Elafant Hotel which was established as an inn by the keeper of an elephant gifted to Archduke Maximilian of Austria and his bride by the King of Portugal. Houses that formerly belonged to wealthy merchants include the Haffnerhaus, the Lamberhaus, the Gusettihaus, the Ritzerhaus, Dachsbergerhof and the Cheuzleins House. The Langenhof was established by Archbishop Max Gandolf von Kuenburg for his family and the Kapellhaus was used as a residence of the chapel choirboys.
Image by Andrew Bossi on Wikimedia under Creative Commons License.