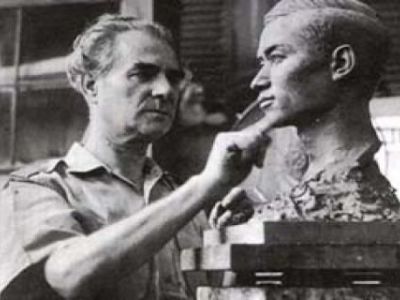 Professor Silpa Bhirasri is an Italian sculptor who was honored as “Father of Thai modern art and contemporary art”. Born in Italy on September 15, 1892, he belonged to a merchant family whose parents did not care much of art. He had, however, special personal interest in art. He completed his graduation from the leading art institute in Florence where he was promoted as an art professor at the age of 23.

In 1923, King Rama VI hired a talented artisan Professor Corrodo Feroci through an agreement between the Royal Thai Government and Italian Government. He came to Thailand along with his wife and daughter and took the position as a sculptor of the Fine Arts Department. Soon he proved his talent and was trusted to work as a designer and sculptor of important monuments in Thailand. He designed many monuments for various cities in rural areas. In 1933, he founded the first art school by the name of Silpakorn School in Thailand which later upgraded as Silpakorn University in 1943 with Professor Corrodo Feroci as the first dean of the Sculpture Faculty. Later his name was changed to a Thai name Professor Silpa Bhirasri.

Operation hours: Monday to Friday: 8:00 am to 5:00 pm
Image Courtesy of Wikimedia and Le Peak.