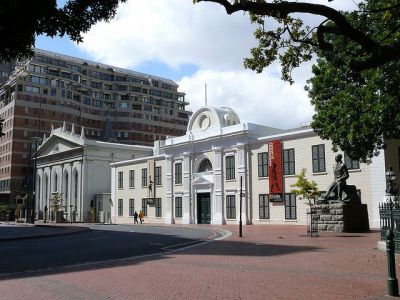 The Slave Lodge is located on the corner of Wale and Adderley Streets and is an interesting museum to visit as it pays tribute to the thousands of slaves brought to Cape Town between the 17th and 19th centuries.

The lodge was built in 1679 and it was here that the Dutch East India Company housed up to a thousand slaves in unsanitary, cramped conditions. The original lodge had no windows and was built of unadorned brick, but today it is a smart, white-washed building that tells the story of the African and Asian slaves who lived and worked in the city.

Through interactive displays, you will learn about slave family roots, their way of life and how some of them settled in the city after winning their freedom.

The museum has a small but excellent collection of Egyptian artifacts that date back to 3050BC, including silver items, textiles, toys, and tools. You can admire a superb collection of Greek vases and ceramics, pottery and cuneiform tablets from the Roman occupation of the Near East.

Between 1811 and 1911 the lodge changed hands several times: it was a post office, a public library, a small prison, and the Supreme Court. In the courtyard, you will see the tombstones (but not the graves) of Cape Town’s founder, Jan Van Riebeeck and his wife Maria.