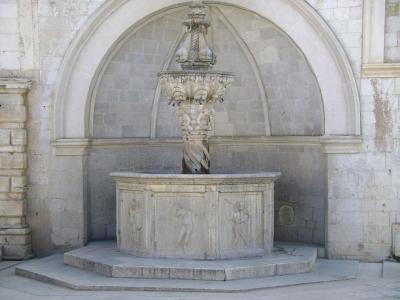 The city of Dubrovnik has been very blessed with some fine examples of ornate fountains. The Small Onofrio's fountain is one such example. It is actually the second of two such structures built, and also the smaller of the two, so that is how it has received its nickname.

The famous Italian artist and sculptor Onofrio della Cava designed this grand example of Italian Renaissance art. If you take a moment to stop and observe, make note of the precise images of the dolphins that adorn it. The project was finished by the famous artist in 1438.

The water fountain is tied into the local city water system and was, in fact, commissioned to celebrate the completion of the waterline through town. Sadly, the fountain received rather significant damage during the war in 1991, but the fountain has been tediously redone to look as good as new.

Why You Should Visit:
Not just a picturesque site at which to pose and to take souvenir photos, it is also supremely practical on a scorching summer's day.

Tip:
Hold your bottle up near the water source to make it easier to fill!
Image Courtesy of Wikimedia and Lasta.